Last October at two separate workshops I learnt about natural dyeing and needle-felting,  though I never put the two together until this spring. I had run out of undyed spun yarn for natural dyeing experiments, and so was using unspun undyed fibre instead. I didn’t know what I was going to do with all these small hanks of coloured fibre, and then it occurred to me that I could use them for needle-felting. I hadn’t made much in the way of felt creations since frantically stabbing up some Christmas gifts, but then it occurred to me that felting flowers and animals would be the perfect use for my naturally-dyed fibre.

It seems appropriate to be representing the plants and creatures that I see around me in daily life, using fibre coloured by many of those plants. And so I prefer to make animals, birds and flowers that I come across in person, working from memory and/or my own photographs (though a Google image search and Observer’s Book of Birds comes also comes in useful…).

Earlier this summer I made this seated fox, inspired by a young master I encountered on the playing fields by the canal where I walk my dog. 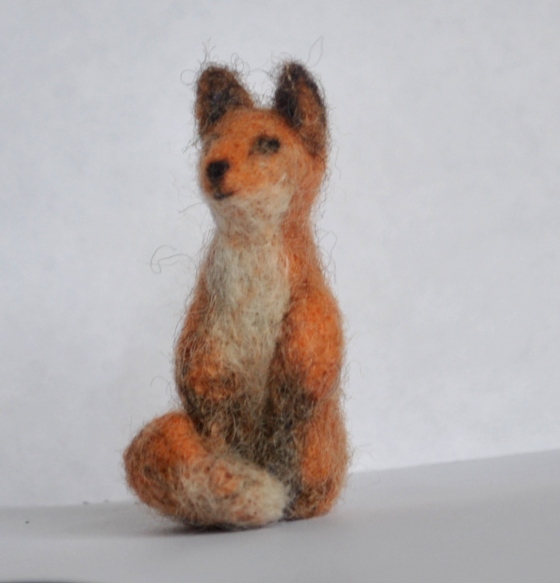 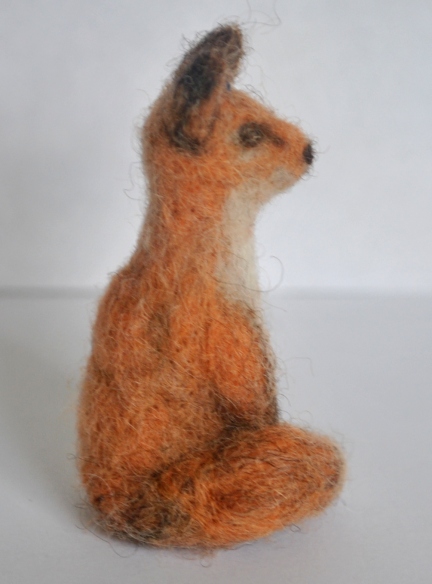 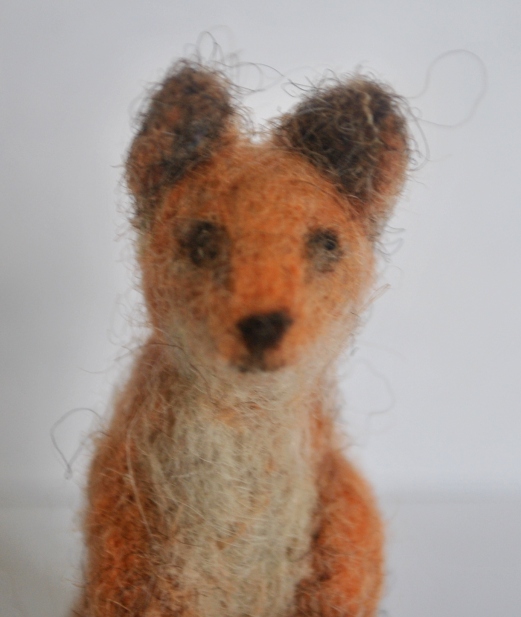 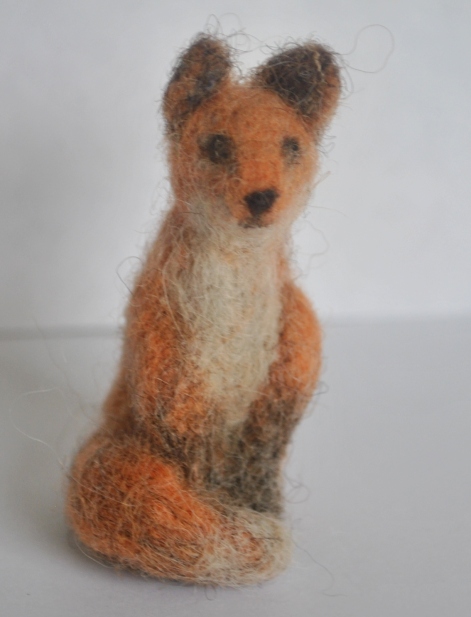 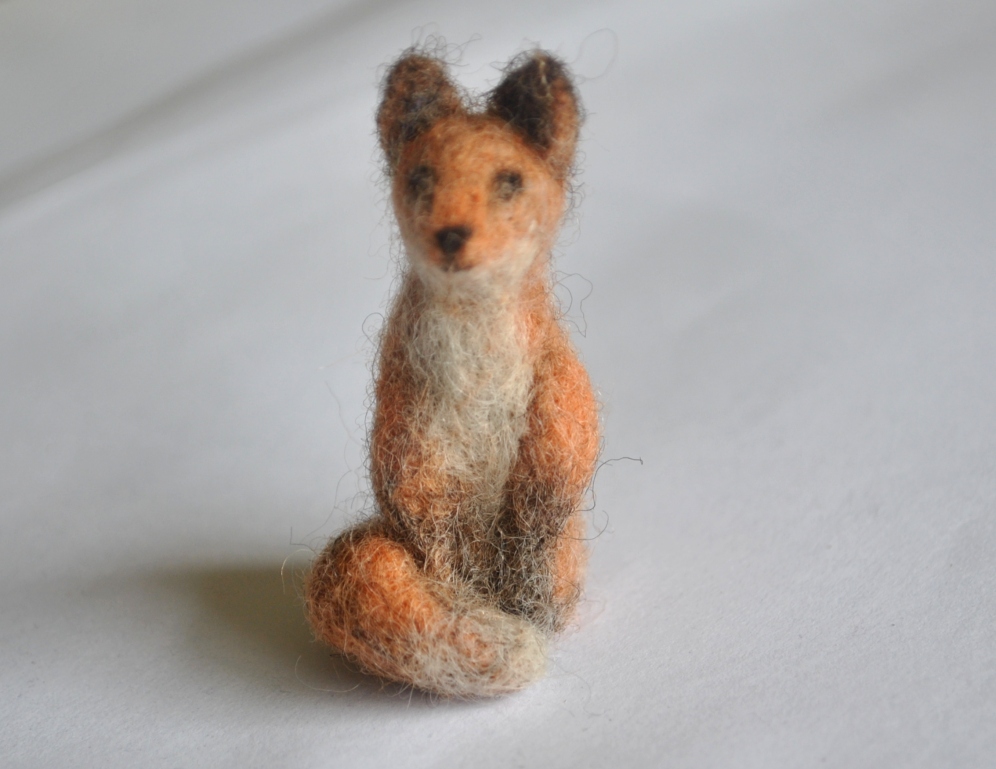 According to Tim Ingold’s Being Alive: Essays on Movement, Knowledge and Description (Routledge, 2011), the Koyokun people’s word for ‘fox’ literally means ‘streaking like a flash of fire through the undergrowth’, and I very much saw that in this previously serene and impassive character. Maybe one day I’ll be able to represent a fox in streaking flash of fire mode, but for now the seated version is enough of a challenge. He is worked in Suffolk wool dyed with madder root, and undyed Welsh Badger-faced, grey Shetland, brown Hebridean, and black alpaca.

On the momentous day of the EU referendum, we went to the Falls of Clyde wildlife reserve at New Lanark for a badger watching expedition. I’d been looking forward to it for months, since I’d never seen a badger before, and for me they’re the most striking mammals we have in the British Isles. And I wasn’t disappointed. I wrote this on my Facebook page the day afterwards:

Before all the bad news, yesterday evening’s badger watch at the Falls of Clyde was incredible. We sat in stillness and silence waiting for them, hoping…and then after 25 mins saw three badgers emerging and having a good scratch in amongst the trees. Then they disappeared, but about 15 mins later one bold gentleman came pottering right up towards us – even climbed up on a log pile so we could get a good look – before scuttling off. It was amazing and I keep thinking about his bright black eyes whenever I feel overwhelmed by all this.

This wee version I made a few weeks ago doesn’t really do justice to that exhibitionist (or just oblivious) soul, but I think it has something of his character. The fibres used are Herdwick, grey Shetland, Icelandic lopi, undyed Shetland, and black alpaca – plus a miniscule bit of Welsh Badgerfaced because I couldn’t resist! 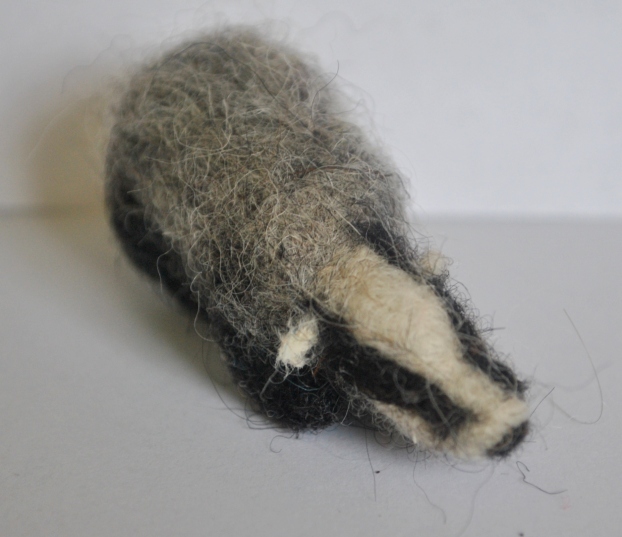 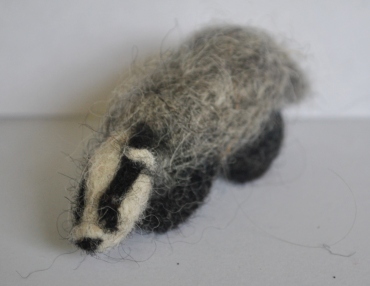 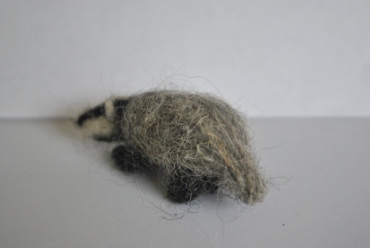 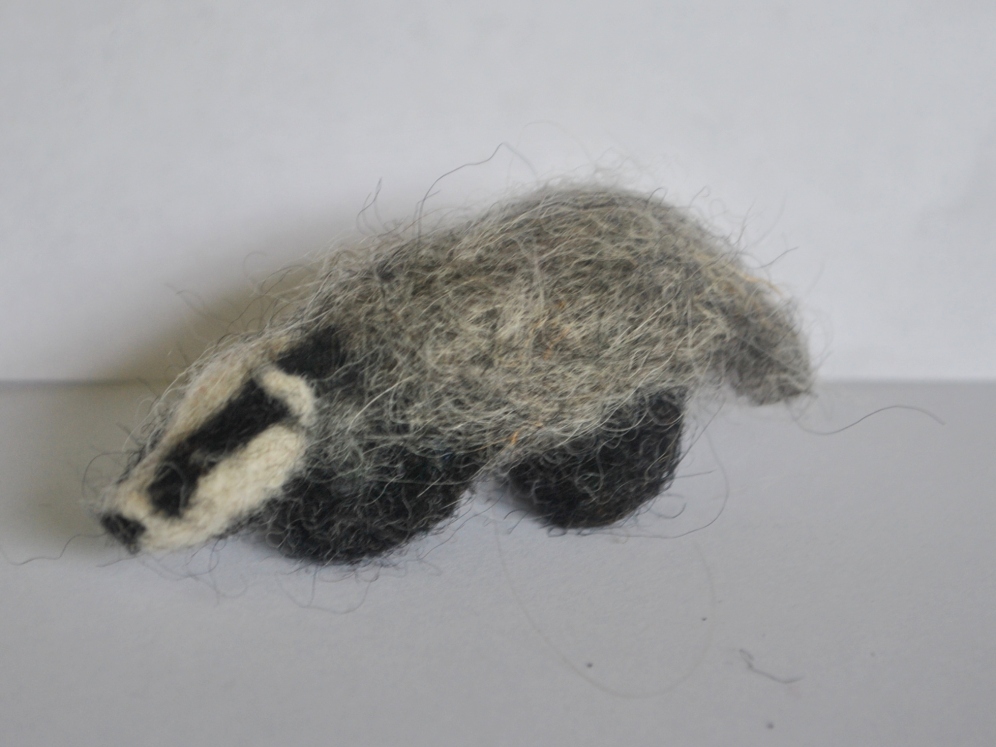 A week or so before the badger watch I’d read Cynan Jones’s wonderful yet appalling novel, The Dig, which features badger-baiting–something I’d not really known about before–and I’d been thinking a lot about this ancient and complex antipathy between humans and badgers, and the terrible cruelty that has been inflicted on them, whether in illegal underground fights or in the recent UK government-sanctioned culls. This month it has become more likely that foxhunting will be legalised again, and so this summer it has been bittersweet to encounter these beautiful and fascinating creatures, and make felt versions of them. It’s increasingly important to support the work of charities such as the League Against Cruel Sports, the Badger Trust, and the Scottish Wildlife Trust. I might not be able to help making wildlife-inspired felts that look somewhat ‘cute’, but I want to celebrate these animals without a conception that is kitschy or romanticised.