Much as I enjoy dyeing with foraged weeds, since the result is nearly always a variant of yellow it is good to try an alternative colour from time to time. The blues from indigo and woad are exciting because of their vividness, and the magic of the slightly tricky process needed to achieve them.

Having managed dyeing with indigo powder, I wanted to try the British equivalent–woad–long associated with the body paint of the ancient Britons as well as being a traditional source of blue dye here. Apparently the last commercial dyeworks using woad closed in Lincoln in 1932! I bought the seeds from Dyeing Crafts and planted them in April. I was assured in a number of sources that woad is easy to grow, and indeed it did pretty well (with the assistance of copper tape to deter slugs!) despite all the woes that have befallen my other plants.

As you see, it does get nibbled by caterpillars and aphids a bit, and I was concerned this would be a problem, but thankfully hasn’t has any adverse affect. It was the holes in the leaves that prompted me to quickly harvest and use it before going away for a week in mid-July. I used the same process as described an illustrated below, but didn’t take pictures. The leaves you see here are all regrowth after I harvested the first batch, from last weekend.

I strained and squeezed the leaves (much like when cooking with spinach!) and reserved the leaves for later. I reheated the weak-tea-coloured liquid to 50 deg C, and added some sodium carbonate to turn the liquid green. Then I took the operation outside, as it starts to get smelly! (Once the temperature dropped below 50 deg C I put the dyepot in a larger pot of hot water, to keep it at 50). I whisked the green liquid to get blue bubbles and foam on the surface – this is when it starts to feel really witchy!

Once I had lots of blue froth I sprinkled the very smelly and slightly dangerous Spectralite (colour run remover) onto the the surface – this is to remove the oxygen from the vat, and leaves a rather oily look to the surface. Then I left it for half an hour (under a cardboard box, to maintain the temperature and just in case of rain).

By the time the liquid looked green enough to dye with it was pretty dark, and I had to get my partner to take the pictures, so sorry for the quality! I left the first couple of hands of Suffolk wool in the vat for just a few minutes. As you’ll see, when they come out they are a pale green.

As the fibres are exposed to the air they start to turn blue. It’s important avoid them dripping into the vat in case of bubbles.

It takes a minute or so for the fibres to turn from green to blue.

And the results are amazing! The dark teal is wool that was yellow (dyed with horsetail) before dyeing with woad.

I carried on adding fibres to the bath until I wasn’t getting any more colour from it. Something I did this time round, that I neglected to do previously, was maintain the heat of the dyebath – eventually bringing it inside to heat on a low heat on the stove. The very pale blues I got at the end had more of a mauve tint than before.

This is the yarn I spun from my first attempt at dyeing with woad leaves – the various batches carded together, spun and then chain-plied. I can’t believe I got these colours from something I grew in my garden!

I also needlefelted a forget-me-not from that first batch. 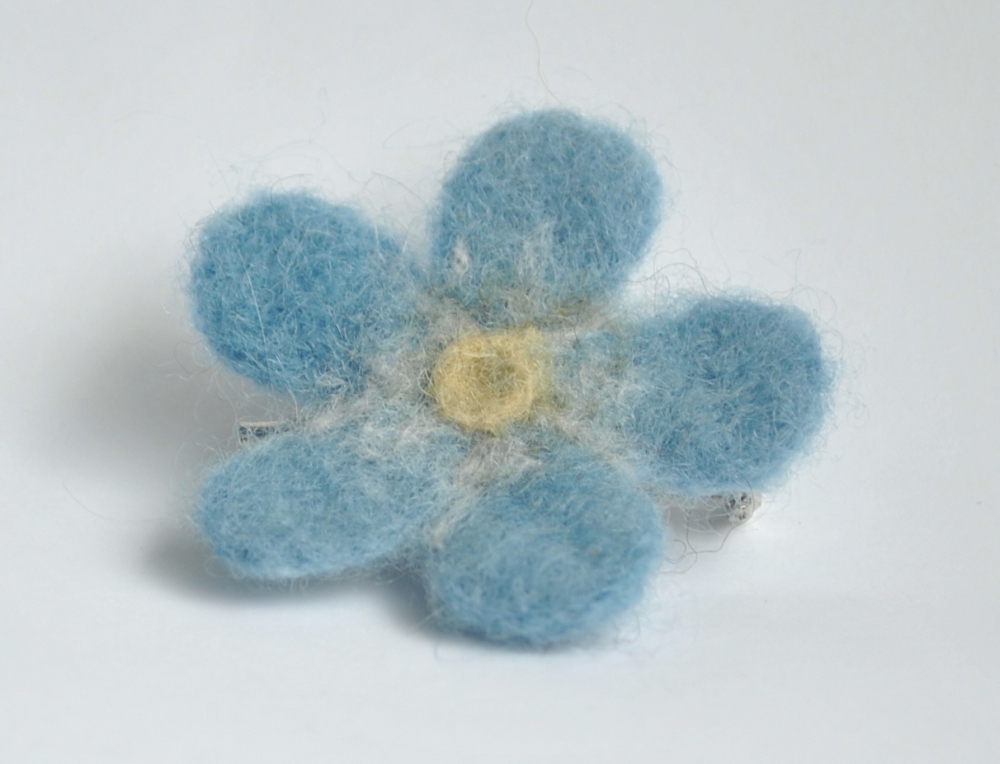 The leftover leaves can then be resoaked, heated and strained to dye wool tan and peach colours. Using mordanted wool I had much the same results as madder exhaust.

I’m already getting quite a bit of regrowth on the woad plants, so I might get enough for one last go with them. Woad is biennial but doesn’t yield colour in the second year. However, I will leave in in the bed in the hope that it flowers next summer and I can harvest the seed. Although I still have plenty of seeds, so I’ll be planting more in another bed next spring. And maybe one day I’ll even be brave enough to do it the old fashioned way, using stale urine…