At different times of the year there are certain visual motifs in nature that I get obsessed with trying to represent in coloured wool. In winter, the silhouettes of bare trees against the milky light of the sky; in spring, the bright yellow of daffodils; in autumn the oranges and golds of the leaves. This year towards the end of summer it has been the vibrant, bluesy-hued pinks of rosebay willowherb and knapweed. 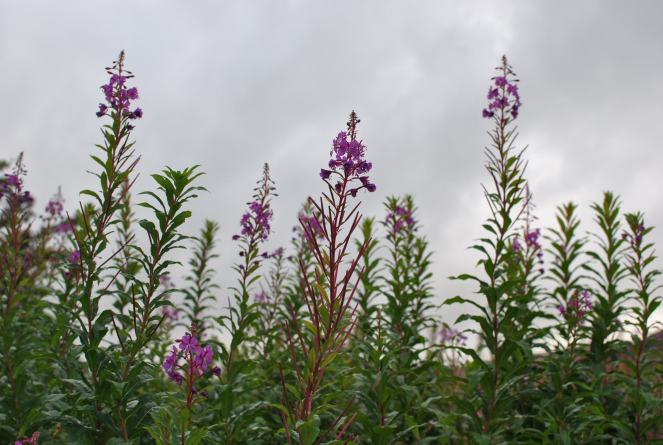 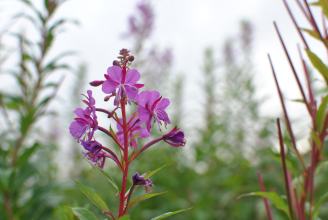 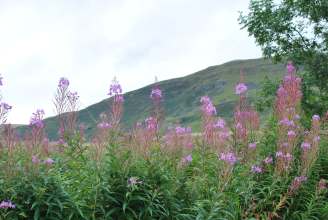 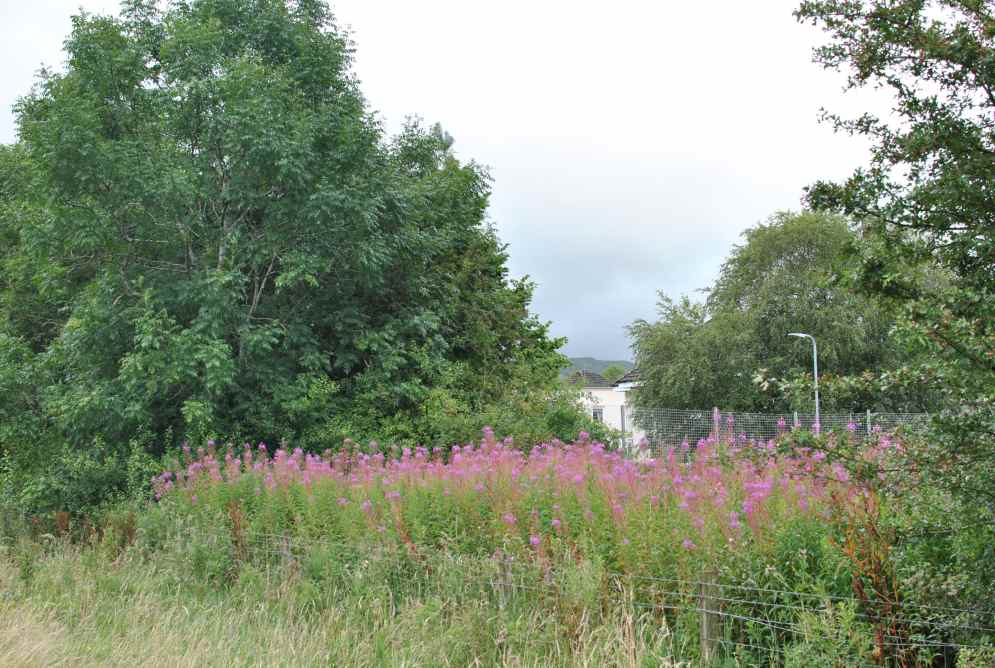 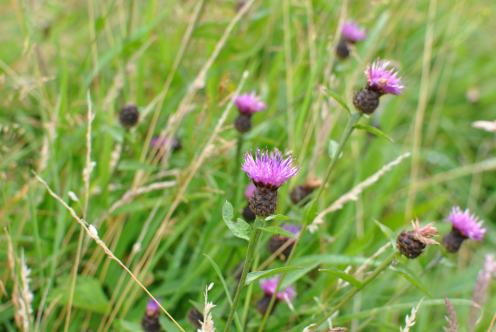 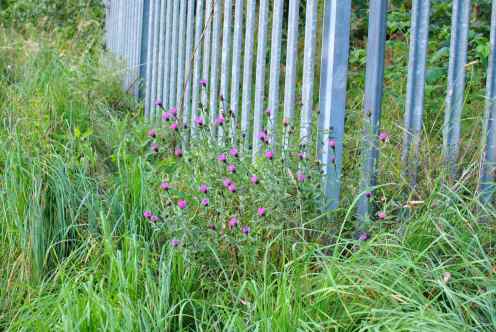 I’ve done plenty of dyeing with rosebay willowherb before, but had yet to attempt to picture it in felt. The earthy sorts of colours usually achieved from dyeing with plants aren’t really much good for the almost un-natural splashes of magenta of these common wildflowers/weeds. Even with alkaline modifiers/extraction method, the reds of madder (so easily tending towards brown) are more coral, at best rose-y.

But I’ve found some exceptions to this  in my recent dyeing experiments. A lot of my dyeing with woad leaves now is about altering existing colours–for example over-dyeing yellow from pineapple weed with woad to get bright green. I recently got a fabulous variety of pinks from a dyebath of brazilwood* soaked in chalky water, and I used wool previously dyed with woad to get a lovely range of purples and mauves. 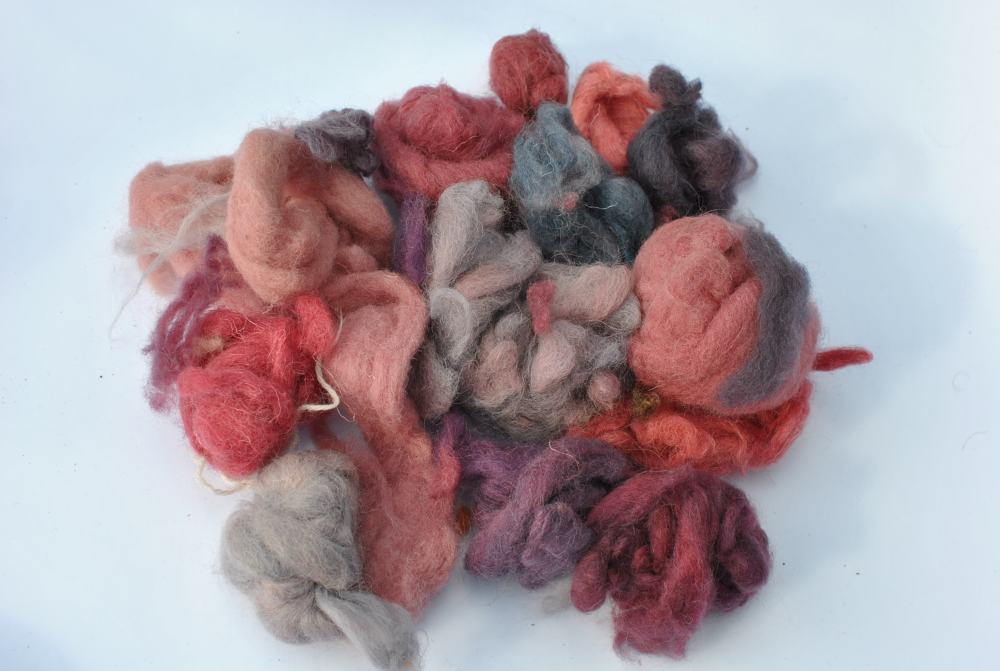 *Brazilwood is the heartwood of several species of Caesalpinia trees, and as such requires the felling of the tree. I bought the dyestuff several years ago, not knowing what it was, before I knew much about natural dyeing. I hadn’t even intended to buy the dried wood, thinking I’d get a powdered extract. Anyway, brazilwood from Brazil is now banned, and while the more plentiful species from India are still available from natural dye suppliers, I would not buy it myself now – something from so far away seems to go against the reasons for using plant dyes in the first place. But since I have the stuff, I may as well make good use of it.

Another source of pinks and purples didn’t require any combination of dyes or chemical modifiers – the only cause of variation was the strength of the dyebath and the addition of sunlight! Last year I wrote about fermenting lichen in ammonia in order to obtain purples and pinks. Unfortunately those jars didn’t do well in the cold shed of our previous home, plus I didn’t want to risk transporting them in the housemove. But on a trip to the isle of Tiree last November I collected quite a bit of xanthoria parietina lichen, which I started fermenting in April, and dyed in July. 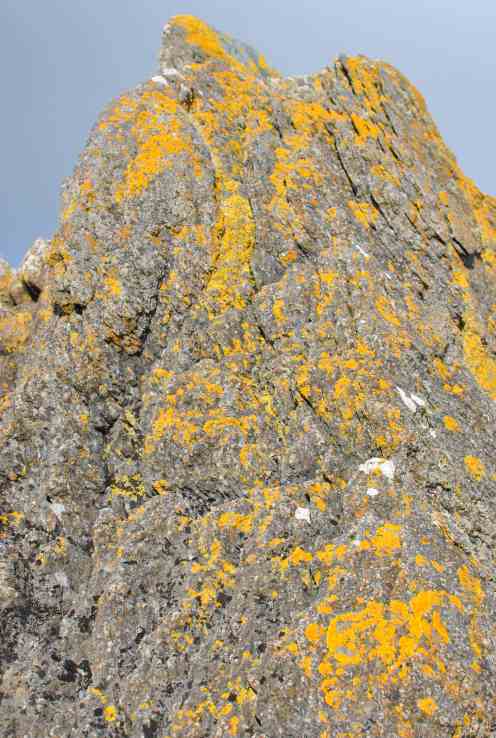 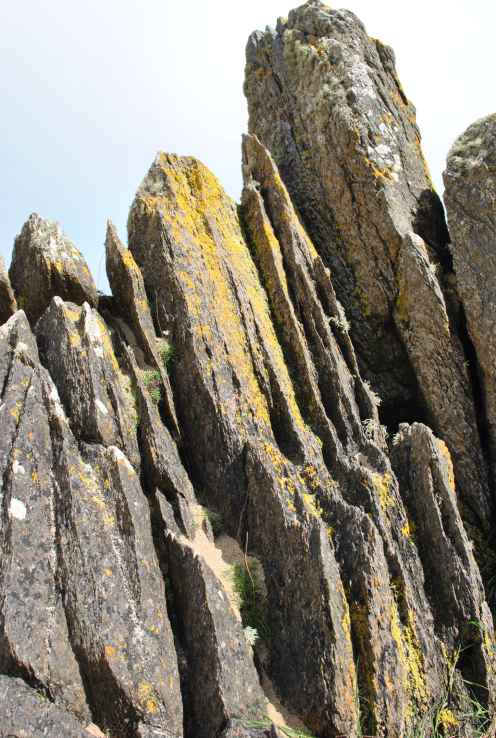 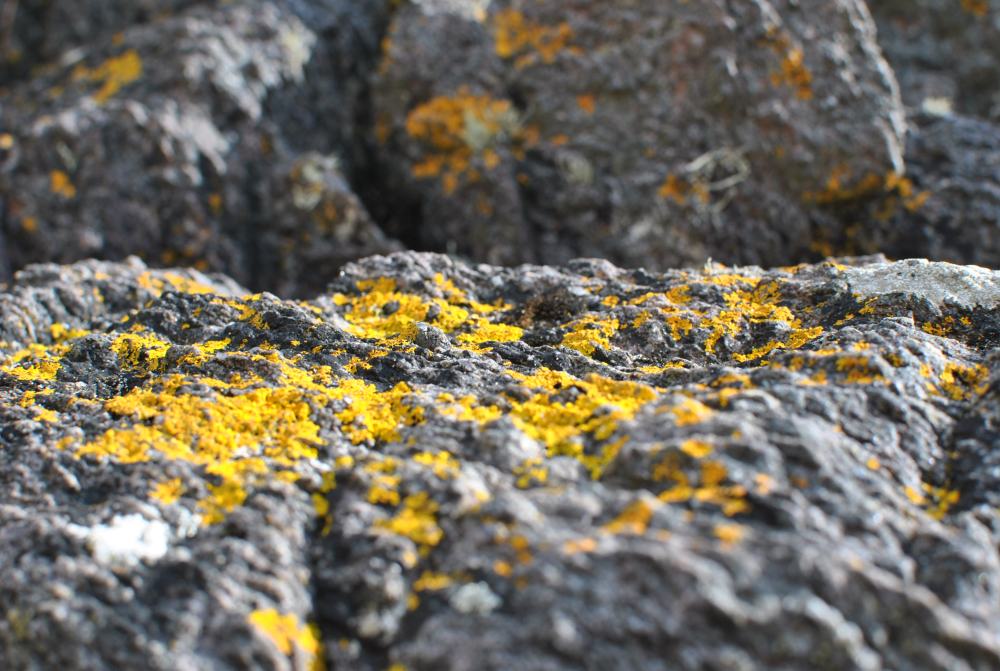 The lichen pictured above is from last week’s trip to Islay, not the rather more abundant stuff I gathered on Tiree.

Despite the horrible smell of ammonia, it was great fun to dye with because of the gloriously bright pink. 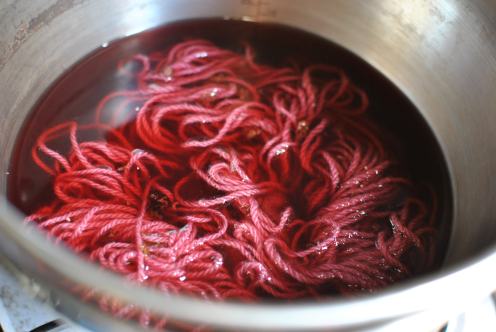 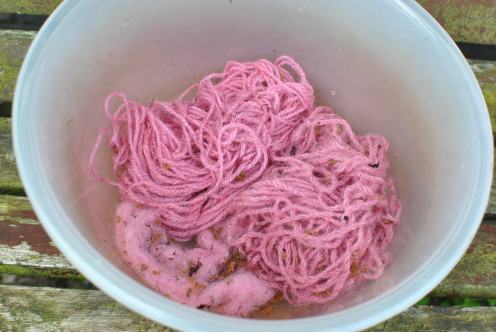 But the most fun part was the magic that happens when you dry the dyed fibres. I separated each batch into two parts, one to dry in the dark inside, and one to hang outside in the sun. 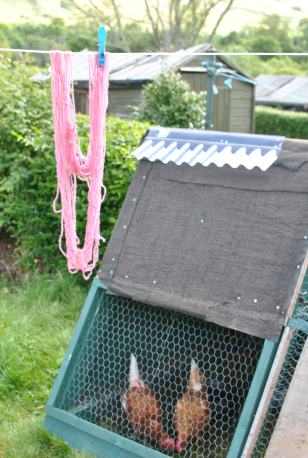 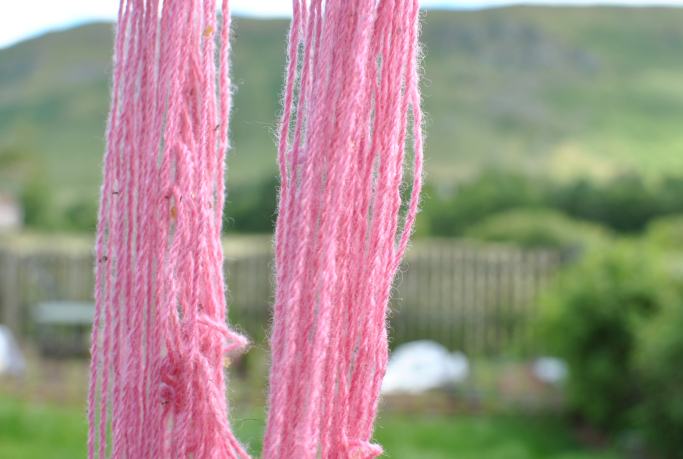 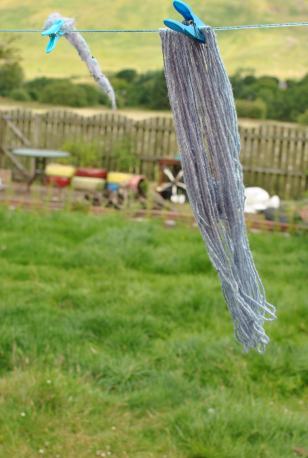 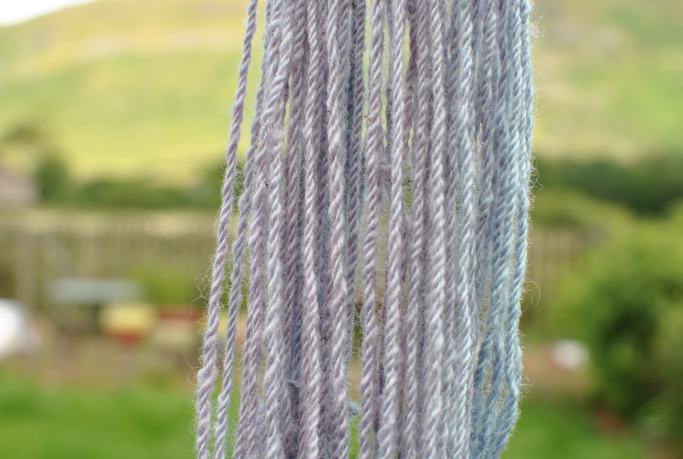 …and then eventually to blue. 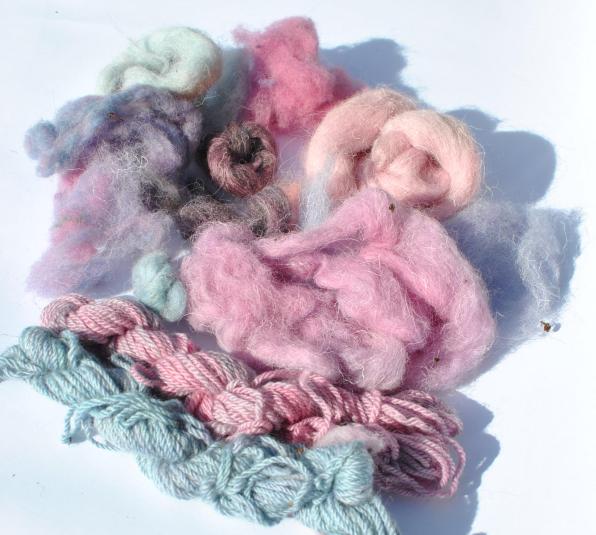 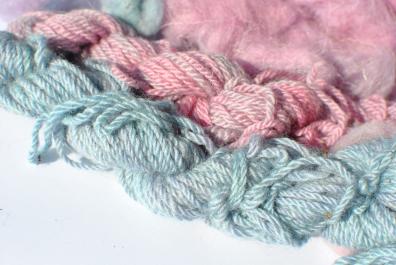 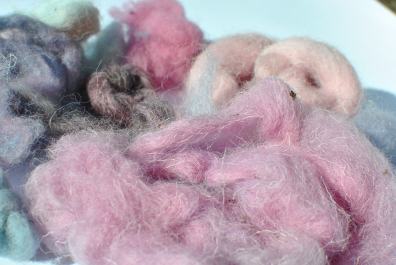 After an initial ‘sketch’ of some knapweed taken from ‘life’… 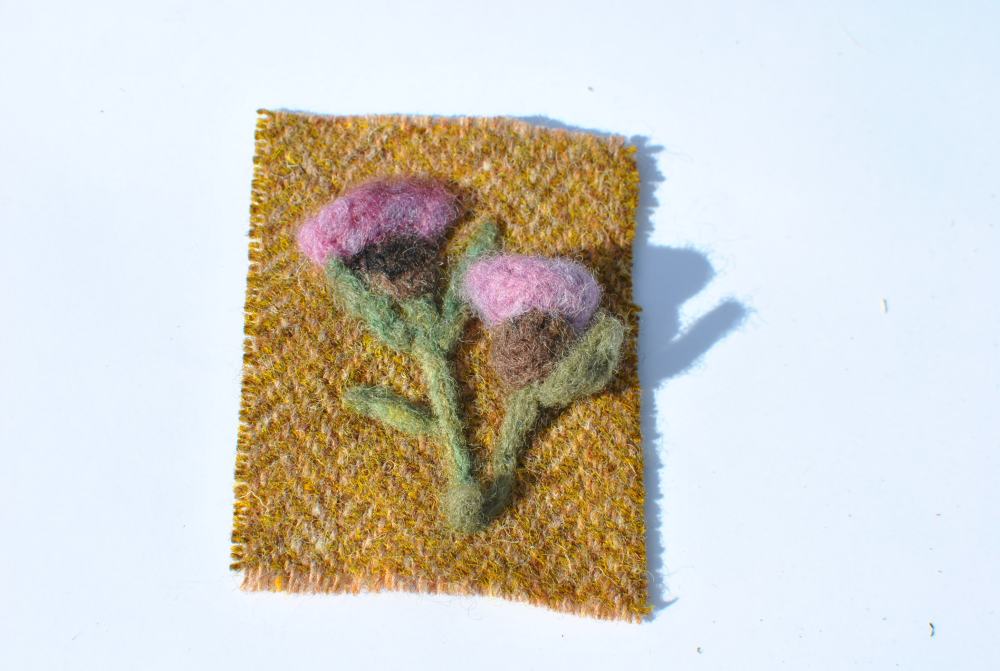 …I used the fibres dyed with xanthoria, brazilwood and woad to make a larger piece celebrating the pink and purple wildflowers of late summer. 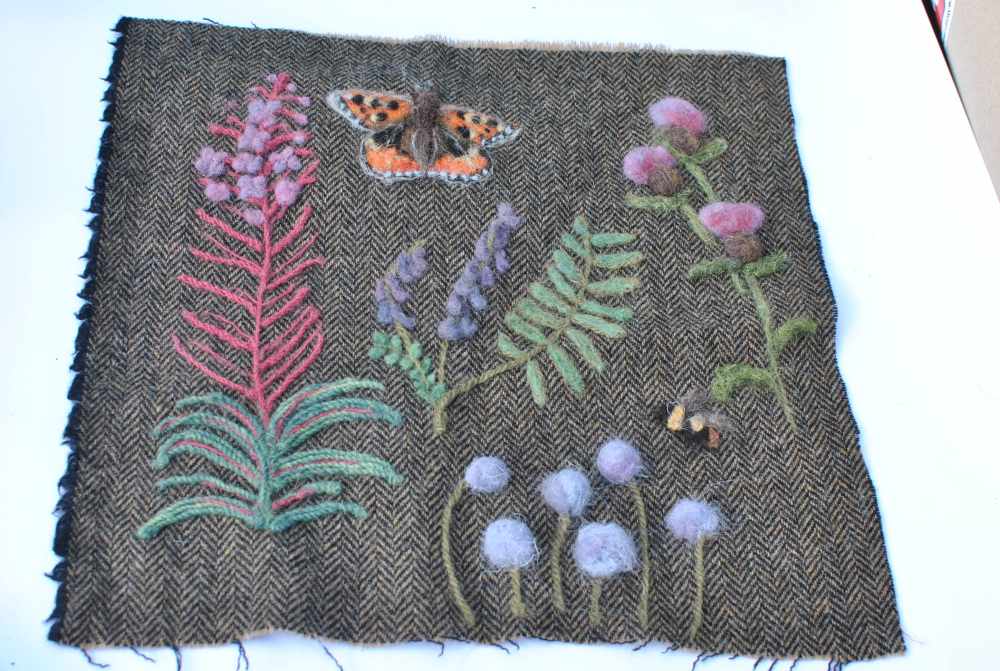 As well as the pinks of the willowherb… 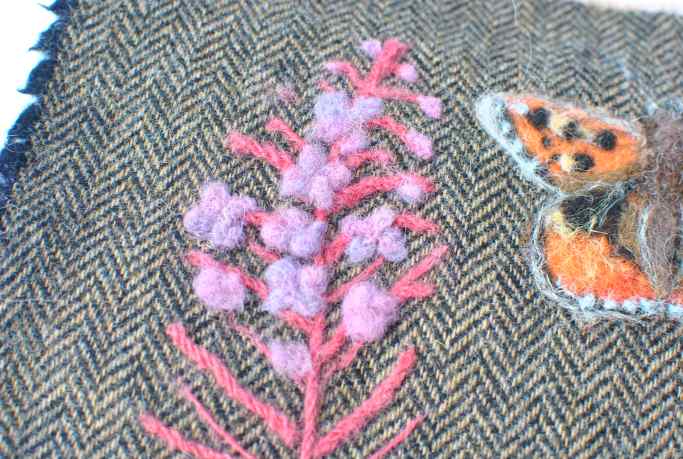 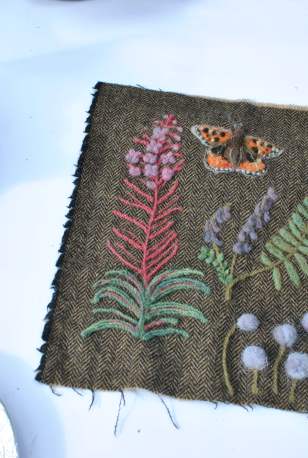 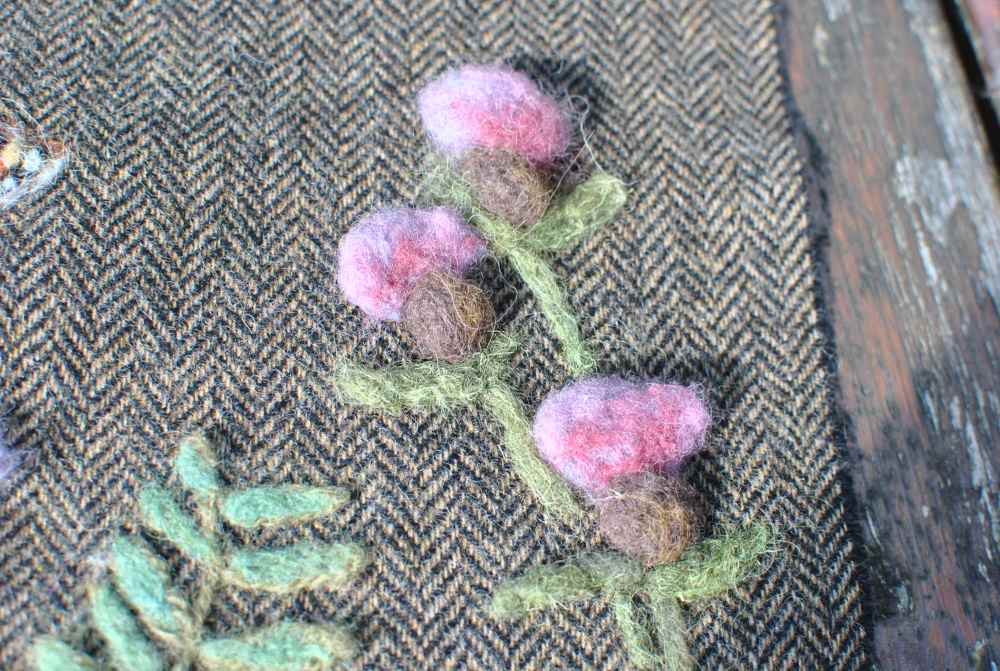 it also includes the purples of tufted vetch… 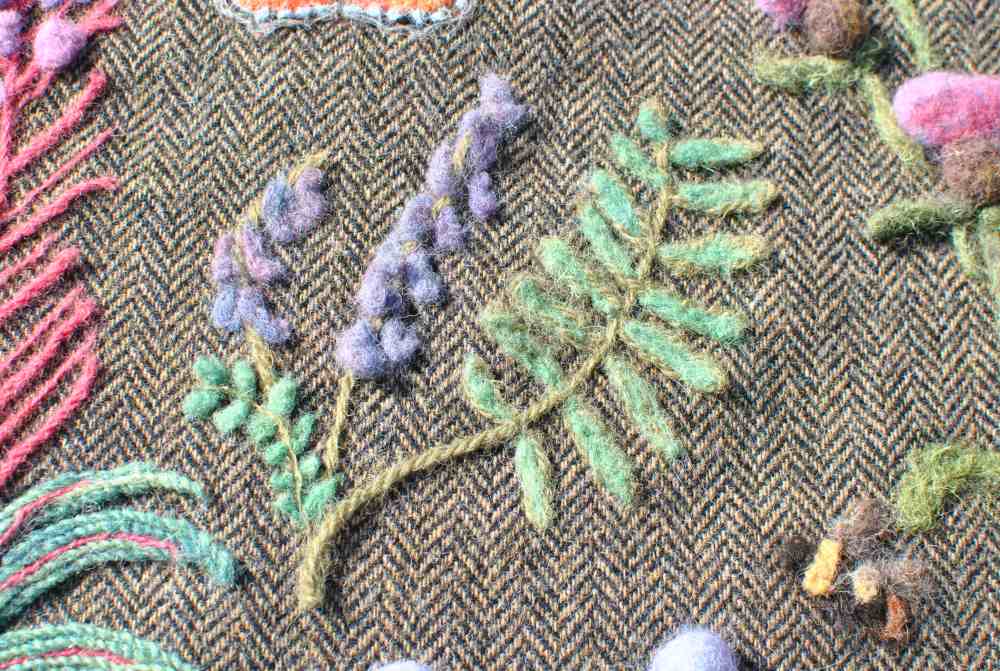 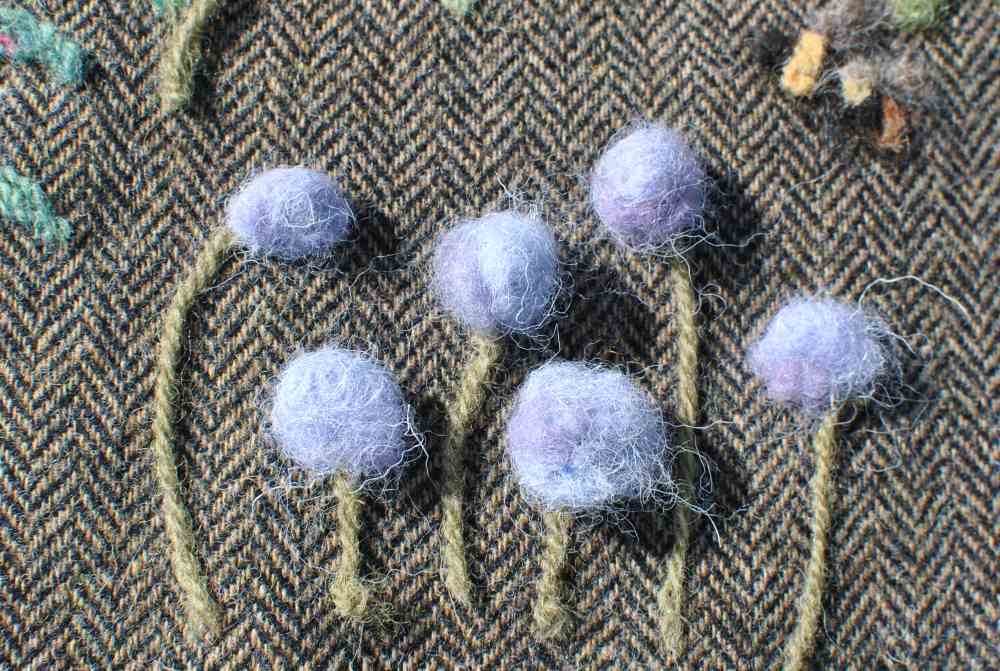 The greens are a combination of meadowsweet, hawthorn and rosebay willowherb modified with iron and/or overdyed with woad. The orange of the small tortoiseshell shows the orange hues of brazilwood when soaked with acid rather than alkaline. 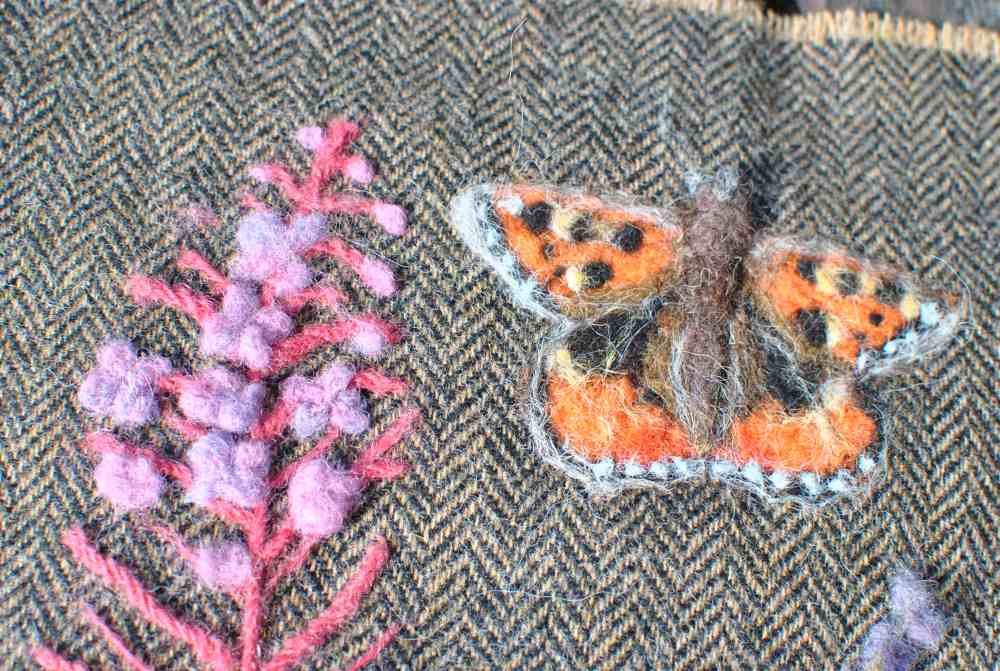